It is a solid operating system well suited to both newcomers and seasoned Linux users alike. The Mageia distro is a powerhouse Linux OS filled with features and options unmatched in other Linux versions.

Mageia Linux is a fork of the now-defunct Mandriva Linux. It was developed by a team of former employees of the France-based commercial software company that folded Mandriva. The first Mageia version was released in September 2010.

Since then, the developers have released one major upgrade each year with support for 18 months. Mageia does not have a long-term support release. Security and bug fixes are available for each new release and the immediately preceding release from the Mageia Control Center.

Images for version 7 are available for both 32-bit and 64-bit architectures, as well as live DVDs for 64-bit Plasma, GNOME, Xfce and 32-bit Xfce. 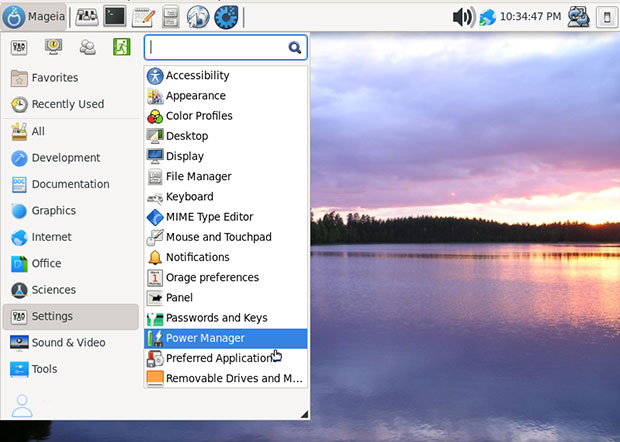 The Xfce desktop is one of the most recognizable platforms. It combines a traditional Linux look and feel with modern speed and functionality.

This latest version, released July 1, is a serious contender to replace whatever OS is on your hard drive now. It provides something that most Linux distros fail to achieve.

Mageia is packed with the newest application versions. It also has lots of new features and support for very recent hardware.

Developers made an effort to enhance gaming in Mageia 7. This release has many new upgrades and additions to the game collection.

I receive a regular influx of reader comments recommending favorite distros to use. Many of the volunteered comments describe Linux distros that are good bets to try because they present little or no hassle.

Mageia is one name that is frequently mentioned. Several writers have shared that they tried Mageia Linux as a replacement for a current distro that was not living up to expectations. Once tried, Mageia became a favorite choice.

I initially tested Mageia when version 2 arrived in 2012. It was surprisingly impressive then for such a newcomer. However, its developer roots grew from Mandriva veterans, so the forked OS started as more than a new distro.

Mageia has a lot going for it. It has lived up to its potential. One reason for Mageia’s solid reputation is its independent status. It is not based on one specific Linux family such as Mint, Ubuntu, Fedora or Arch.

Mageia uses urpmi, a command line tool for managing packages and repositories. It is an ideal method for installing, updating or removing software packages without a graphical user interface, or GUI. It is much like the apt-get tool in Debian-based distros.

Urpmi handles dependencies automatically. For Linux beginners, the included graphical tool rpmdrake is a better option. Drake, a carry over from Mandriva Linux, is also included in Mageia.

The rpmdrake package management system is used by Linux Standard Base (LSB)-compliant distributions for the low-level handling of packages. It can query, install, verify, upgrade and remove software packages.

If you have used Fedora-based distributions such as Red Hat Enterprise Linux (RHEL) or CentOS, you no doubt are familiar with RPM packages and the companion YUM (Yellowdog Updater Modified) high-level tool that works with RPM repositories.

You also can use the alternative package manager, DNF (Dandified Yum). The community introduced DNF as an alternative to urpmi since Mageia 6. DNF was forked from YUM several years ago.

DNF has an enhanced problem-reporting feature and advanced tracking of weak dependencies. It also has support for rich dependencies and more detailed transaction information while performing actions.

The Mageia project is community-based and is maintained by a nonprofit organization (Mageia.org). Its goal is to develop a free Linux-based operating system.

That goal pushes the Paris-based organization toward goals beyond delivering a secure, stable and sustainable operating system. It strives to become a credible and recognized community in the free software world.

Toward that end, the installation process gives users several options in selecting software. Mageia draws from three different repositories or media types. These depend on the type of license applied to each package.

The Core repository includes packages licensed under a free and open source license. The set of the “Core” media along with “Core Release” and “Core Updates” are enabled by default.

The Nonfree repository includes packages that are free-of-charge and free to redistribute. These contain closed-source software.

For example, this repository includes Nvidia and AMD/ATI proprietary graphics card drivers, firmware for various WiFi cards. The Nonfree media set is enabled by default. You can disable it during the installation.

The Tainted repository includes packages released under a free license. Software packages in this repository may infringe on patents and copyright laws in some countries. Examples include multimedia codecs needed to play various audio/video files and packages needed to play a commercial video DVD.

While added by default, the Tainted repository is not enabled by default. You must opt-in during the installation process.

The Mageia release comes with a variety of desktops and window managers not easily found in other Linux OSes. Included is improved support for Wayland and hybrid graphics cards.

Wayland is a display protocol slowly replacing X11 video. It enables each program to use the Wayland protocol on its own. 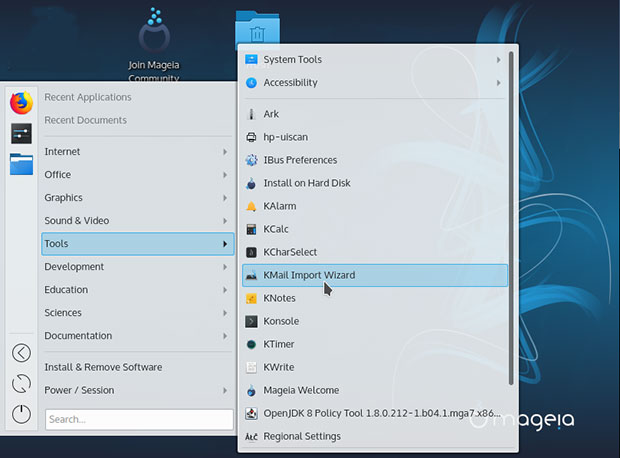 Mageia is a reliable OS for most hardware, including most i586 and x86_64 computer systems. It runs on a reasonably low-powered set of requirements.

It is processor-agnostic. It runs on any AMD, Intel or VIA processor. It will run on a scant 512 MB RAM, although 2 GB is recommended. It has a minimum storage (HDD or SSD) requirement of 5 GB, although 20 GB is ideal.

Mageia is equally forgiving on other hardware configurations. It handles any AMD/ATI, Intel, Matrox, Nvidia, SiS or VIA graphic card. It accepts any AC97, HDA or Sound Blaster sound card.

For some kinds of hardware to work properly, such as WiFi chipsets and 3D graphics cards, specific firmware or software may be needed. You can solve that need by selecting the Nonfree online repository.

Some of the major packages that ship with Mageia 7:

The Mageia distro comes with something many Linux distros ignore. It has a detailed, updated user guide that eliminates all the confusion and frustration of learning a new operating system. Meet the Mageia Welcome application. 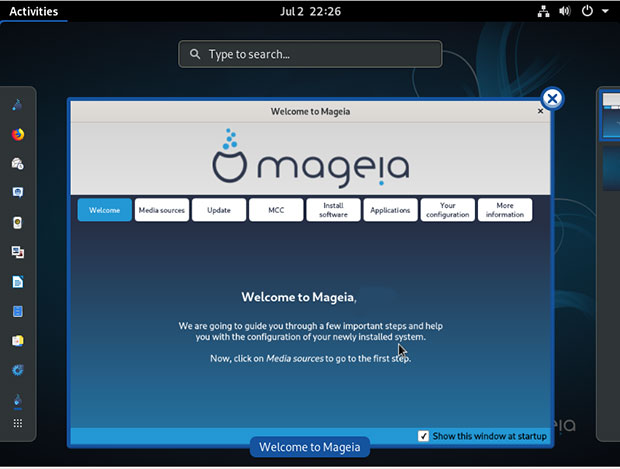 Mageia’s Welcome Application, shown in the GNOME desktop edition, eliminates all the confusion and frustration of learning a new operating system.

By default, this Welcome Screen runs at each subsequent boot. You can change that by disabling the auto-run option.

When you need help using Mageia, invoke the application from the main menu.

Mageia Linux does not strap you with a take-it-or-leave-it desktop mandate. It comes with a variety of desktops and window managers. This lets you create a computing environment that suits your preferred style.

Three primary desktops are available with their own ISO files. GNOME 3.32, Xfce 4.13 and KDE Plasma 5.15 are among the most popular and productive desktop options in the Linux world.

Pick the KDE Plasma option if you want something a little extra. If you like computing on the edge, install plasma-workspace-wayland to try out the Wayland display manager integration.

If you download the GNOME ISO installation, by default you get the version running on Wayland — but you can opt to install an alternative “GNOME on Xorg” session.

You can opt for the GNOME 2 look and feel, or GNOME 3, which provides a Gnome Classic session.

Have It Your Way

Beyond those choices, you can install other desktops from a list of alternatives. They are available in Mageia’s online repositories as fully integrated desktop add-ons.

LXDE is a very lightweight GTK+2-based desktop environment. This an interesting option to try, as it is still updated with ongoing improvements from upstream and the Mageia maintainer.

Otherwise, the LX community has refocused in part on the merged LXQt desktop. LXQt 0.14.1 also is provided as a desktop option in Mageia 7.

MATE 1.22.0 is a classic GNOME 2 integration that provides an old school Linux look and feel. For a full MATE Desktop experience, install the task-mate package after initial installation.

Cinnamon 4.0 is a full-featured desktop alternative popularized by the developers of Linux Mint. It offers a GNOME 2 style environment with an expanded feature set and a look and feel that rivals MATE.

Another option is to keep the Mageia 7 installation very lightweight by using small and efficient window managers instead of a dedicated desktop environment. Install your preferred window manager and enable it in the login menu of your display manager.

Having this collection all in one place is a unique offering. I have not seen such a wide range of options in any other distro.

Linux dispels the notion that one universal computing platform must define the features and functionality for all users. That is why so many distributions exist.

The Mageia distro is a prime example of how freedom and choice are the hallmarks of open source operating systems. Mageia 7 pushes the limits of personal choice and usability definitions.

What gives Mageia Linux its edge is its independence. Mageia 7 is not based on a predefined Linux family of distributions.

Want to Suggest a Review?

Is there a Linux software application or distro you’d like to suggest for review? Something you love or would like to get to know?

Please email your ideas to me, and I’ll consider them for a future Linux Picks and Pans column.

And use the Reader Comments feature below to provide your input!

Jack M. Germain has been an ECT News Network reporter since 2003. His main areas of focus are enterprise IT, Linux and open source technologies. He has written numerous reviews of Linux distros and other open source software. Email Jack.