Last week I was on a panel discussing how 3D printed home building could help emerging countries more rapidly deal with homeless issues, reduce the discrepancies between the poor and rich, and create a more sustainable future.

This emerging building method is also far less wasteful, far faster, and far cheaper to build much sturdier homes. The only real downside is that the skills and technology to build these houses aren’t widely available yet.

Let’s talk about 3D printed homes, and we’ll close with my product of the week, the ARM-based HP Elite Folio.

Many industries are being transformed by 3D printing this century.

Starting with manufacturing: HP, for example, moved from prototyping to production parts, then to colors, and finally to metals. They are working on mixed material 3D printing and the possibility of composite metal/plastic parts.

Redefine Meat has demonstrated 3D printed steaks and is planning to move into other beef cuts, creating a path to eventually being able to print food at home. If broadly adopted, this technology eliminates much of the greenhouse gasses and adverse environmental impacts of beef production, which are significant.

However, the where 3D printing could have the most significant impact is on home building.

Build times are reduced from 8 weeks to 1-to-3 days; costs drop to one-seventh of what it currently costs if humans build the house, and construction waste is reduced by 59 percent (the U.K. construction industry sends 25 million tons of waste to landfill annually).

Taking all of this into account means you could build seven homes of similar size for the cost of building one home using traditional methods, in less time, with considerably less waste.

Before you talk about unemployment, realize that areas experiencing high growth usually complain about shortages of qualified labor and have to use unskilled labor, resulting in mistakes and problems for the new homeowner. So freeing up the highly trained people to do finish work rather than building the entire structure would significantly increase the number of homes that can be built.

Also, building tends to have relatively high accident rates, most of the causes for those accidents are eliminated with a 3D built home.

When 3D printing is applied to emergency housing, not only can it consume recycled materials, it can more easily be recycled once the crisis has concluded because the printing material can be altered for short-term use.

Rethinking the House of the Future

When talking about the future house, I remember visiting a Disneyland attraction built in the 1950s called Monsanto House of the Future, which showcased many advancements that came much later.

Dishwashers were easy, but robotic vacuum and centralized control for lights and entertainment came much later. The Monsanto house was raised so it could deal with floods and made out of fiberglass, which not only survived earthquakes, but when they came to tear the thing down, it laughed off the wrecking ball. It doubtless would have survived floods, earthquakes, tornadoes, and hurricanes and assured that those living in it always had a home.

Oh, I should point out, only because no one ever brought the idea to market, the Monsanto House dishwasher both washed and stored the dishes and cutlery; no need to unload the dishwasher. You put the dishes away dirty, started the process, and you were done. Granted, continually washing every dish you had several times a day would have gotten old. Still, you could have sections for daily dishes and then another dishwasher for pans and dishes you only used occasionally.

Now imagine if you updated that Monsanto House design for 3D printing. You’d get a very resilient home that could be built in less than a week. It could survive almost any natural or human-made disaster and the cost would be a fraction of a traditionally-built home. The only issue now is finding someone to build one.

3D printing is changing the world, but one place where it is making a huge difference is in building homes. In China, they have moved to this technology aggressively because it is better, faster, cheaper, more durable, and the designs it is capable of are more fluid and, to my eye, often more attractive.

There are a few out there though Apis Cor, SQ4D, and WePrintHouses are three that are in operation now (I like the designs WePrintHouses is showcasing the best).

Good luck, good hunting, and I’ll leave you with this link to some fantastic pictures of 3D printed homes and concepts.

My favorite laptop before the pandemic was the HP Spectre Folio. It was wrapped in leather, was WAN connected so it always had a network connection, and it used a cantilevered screen, so it worked better than most laptops on a plane.

The Spectre Folio had two problematic issues, though: It came in burgundy and brown, two colors that went out in the 1970s; and I thought it should be ARM-based rather than x86-based because extending battery life is where a laptop with its design should excel.

Well, HP updated the laptop this year to the HP Elite Folio, which is now ARM-based and comes in black. HP has moved from LTE to 5G support, increasing the speed of its WAN connection dramatically. The shift to ARM jumps battery life to more than 24 hours for movies, and it should get over 10 hours for productivity, so it has plenty of battery life now. 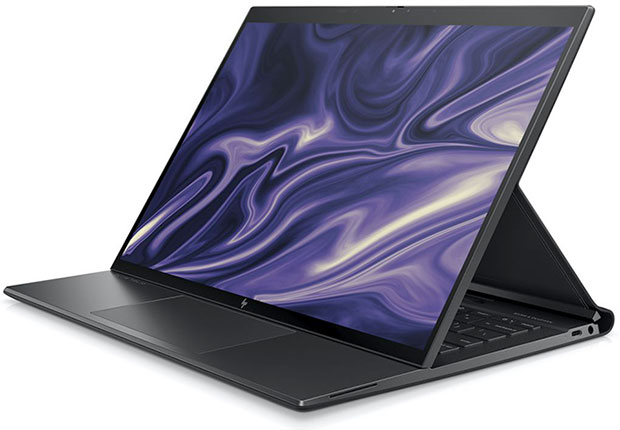 Carry weight is 2.85 lb. or just about .05 lb. heavier than a MacBook Air, and it feels lighter. The padded “leather” cover makes the laptop easy to carry, and, like the former model, I found I could leave my backpack at home.

If you are mainly green, it is good to know that the leather on this laptop isn’t genuine; so no cows were hurt building this device, but its high-grade vinyl does feel like leather.

One other issue with the older product was getting to the SIM was a pain because it sat in the hinge under the screen. The Elite Folio has moved the slot to the pen bay above the keyboard for easier access.

The laptop is due to market any day now. I expect the weather in Texas is causing some delays, but this laptop is worth waiting for, and, as such, the HP Elite Folio is my product of the week.